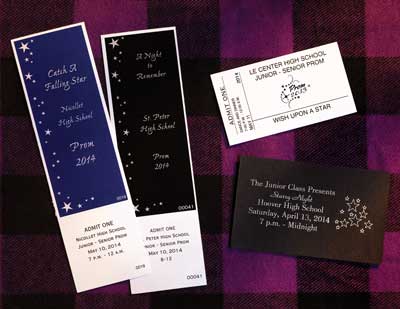 Selling tickets to Prom should be done about six weeks before Prom night. Selling tickets may seem like an easy task. You order tickets with your invitations, sell them, and everybody wants to buy them, right? Most students will be excited to buy Prom tickets right away, but there are always a few stragglers. Follow these tips to sell as many tickets as you can during the time allotted.

Set Ticket Booths in High Traffic Areas
Setting up a ticket booth in a random hallway or school space may not be the best approach. Make sure you set up Prom ticket booths in “high traffic” areas of your school campus. Try some of these locations:

Run A Sales Contest with Your Prom Committee
There’s something to be said for an incentive when selling things. This is also true for tickets. Divide your Prom tickets among your Invitation Subcommittee members, and then have a sales contest to see who can sell the most Prom tickets by a certain date. Be sure to budget a little extra money so the winner of the Prom ticket contest receives a small prize.

Make Announcements Via the P.A. System
Make sure to remind students daily (or every other day) when and where they can purchase their Prom tickets. Make announcements via your P.A. system during homeroom, lunch hours, or during a random afternoon. This will give any procrastinators a push to buy their tickets sooner rather than later.

Promote Prom Tickets on Social Channels
Take Prom ticket selling to the next level, and sell and promote them via social channels. Set up a website where students can purchase tickets using a debit or credit card. Don’t forget to promote the sale of Prom tickets on social channels! Use Twitter, Facebook, and other social media channels to urge students to buy their tickets by the deadline.

Let us know what creative ideas you will use to sell Prom tickets this year!